Your Caring Advocate After An Accident 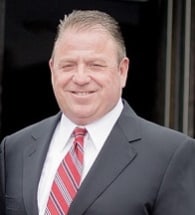 Mr. DeBlasio is a recognized and respected attorney in personal injury law in the legal community. He is a zealous advocate for each and every client that he has represented in his over 25 year legal career. He takes the time on every case to ensure that the compensation received by each client is maximized, whether by settlement, mediation or trial. His client’s know how passionate he is about their case and understanding of how the injury sustained by them has impact their lives.

Mr. DeBlasio grew up in Deer Park, New York and now lives with his wife and children in Suffolk County, New York. He had volunteered his time to coach his daughter’s youth lacrosse team and participates with his sons in many Boy Scout activities. He has volunteered as a public speaker for the Make-A-Wish Foundation of Metro New York, Inc., where he gave presentations to New York State and New York City municipal employees and public school employees to encourage donations.